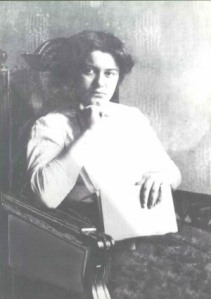 Edith Stein was a prominent Jewish philosopher, writer, teacher, and professor in pre-WWII Germany. After reading The Autobiography of St. Teresa of Avila, Edith converted to Catholicism and eventually became a Carmelite nun, taking the name Teresa Benedicta of the Cross. She continued to write and study. During the war, Catholics of Jewish heritage were arrested by the Nazis and deported to concentration camps. St. Teresa Benedicta was executed in the gas chambers of Auschwitz in 1942. Her feast day is today, August 9.

Much of St. Teresa Benedicta’s work was given to illuminating the role of women and their vocation. She has much to say to us today and deep reading gives echoes of the writings of Blessed John Paul II. The following is taken from “The Ethos of Women’s Professions,” a lecture given by Dr. Stein at a meeting of the Catholic Association of Academics in Salzburg, Austria, on September 1, 1930. The entire text can be found in The Collected Works of Edith Stein, Vol. 2: Essays on Woman.

“Only by the power of grace can nature be liberated from its dross, restored to its purity, and made free to receive divine life. And this divine life itself is the inner driving power from which acts of love come forth. Whoever wants to preserve this life continually within herself must nourish it constantly from the source whence it flows without end — from the holy sacraments, above all from the sacrament of love. To have divine love as its inner form, a woman’s life must be a Eucharistic life. Only in daily, confidential relationship with the Lord in the tabernacle can one forget self, become free of all one’s own wishes and pretensions, and have a heart open to all the needs and wants of others. Whoever seeks to consult with the Eucharistic God in all her concerns, whoever lets herself be purified by the sanctifying power coming from the sacrifice at the altar, offering herself to the Lord in this sacrifice, whoever receives the Lord in her soul’s innermost depth in Holy Communion cannot but be drawn ever more deeply and powerfully into the flow of divine life, incorporated into the Mystical Body of Christ, her heart converted to the likeness of the divine heart.

Something else is related to this. When we entrust all the troubles of our earthly existence confidently to the divine heart, we are relieved of them. Then our soul is free to 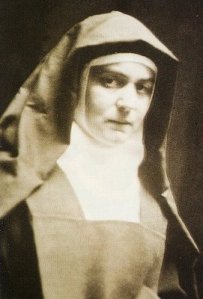 participate in the divine life. Then we walk by the side of the Savior on the path that He travelled on this eath during His earthly existence and still travels in the mystical afterlife. Indeed, with the eyes of faith, we penetrate into the secret depths of His hidden life within the pale of the godhead. On the other hand, this participation in the divine life has a liberating power initself; it lessens the weight of our earthly concerns and grants us a bit of eternity even in this finitude, a reflection of beatitude, a transformation into light. But the invitation to the transformation in God’s hand is given to us by God Himself in the liturgy of the Church. Therefore, the life of an authentic Catholic woman is also a liturgical life. Whoever prays together with the Curch in spirit and in truth knows that her whole life must be formed by this life of prayer.”

Road trips rule in our household. The only problem is we don’t take nearly enough of them. Years ago, my husband and I thought nothing of picking a destination, hopping in the 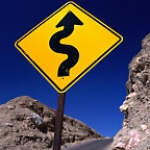 car, and setting out on an incredible journey. We didn’t really have much of a plan, we just ambled along, stopped where and when we felt like it, and explored.  We used to say that the curvy road sign was “our” sign. And it still is. But many things have whittled away at our ability to road trip freely — but have done little to quench the “highway companion” spirit we share, and which our son has inherited.

After seeing a small photograph of Devil’s Postpile in Mammoth, California, in AAA’s Westways Magazine a couple of months ago, I mentioned I’d never been there. My husband said, “Let’s go! That can be my Father’s Day gift.” Perhaps it was an offhand comment, but within a few weeks, we had cobbled together a trip and a budget and marked the calendar — we had 48 hours to travel into the Eastern Sierras and back again. Who knew what adventures we’d have along the way?

It turned out to be a spectacular trip in every sense of the word — a true road trip, into the middle of no where, into wilderness, following rabbit trails as we pleased, and cramming a huge amount of activity into an amazingly small compartment of time. We all agreed it felt as though we had been gone much longer than two days and none of us was ready to come back home. Two things made the trip fantastic — the beauty of nature that surrounded us, and the much-needed time together as a family, just the three of us. It was truly a nourishing time, for the body, mind, and spirit. Grab a cup of coffee or tea and enjoy the virtual beauty break!

Our first stop was at the Ranger Station at the Mt. Whitney portal, just south of Lone Pine. (On a personal note, my father-in-law is legendary for doing Whitney in one day!) It’s so interesting to drive through miles of desert, only to enter into the amazing juxtaposition of the jagged glacier covered peaks of the Sierras, the vast desert scrub (so eerily close to Death Valley), lush trees and grass, and flowing streams and rivers that make up the Owens Valley. If the ocean were closer, this place would truly be like heaven on earth. 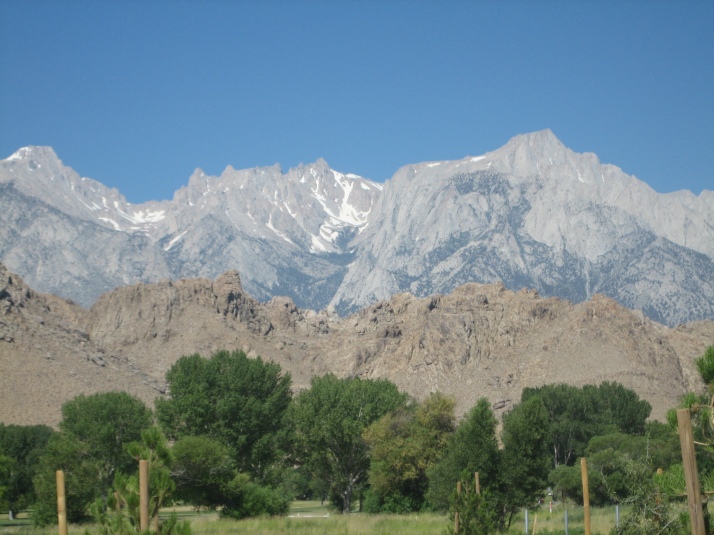 We’re big classic and Western film buffs, so of course we had to do some exploring in the Alabama Hills, just behind the little town of Lone Pine. Hollywood has used these hills, canyons, and valleys to film hundreds of movies over the last 75+ years. We were lucky enough to find the “California Historical Site” of the filming of Gunga Din, one of my favorite films starring Cary Grant. The hills are amazing because they can “look” like many different world locations, like India for Gunga Din or the Middle East for Ironman I. In the total isolation and silence, its easy to imagine the clatter of horses hooves carrying an unsuspecting gunman towards the dangerous Indian ambush lurking around the next rock. 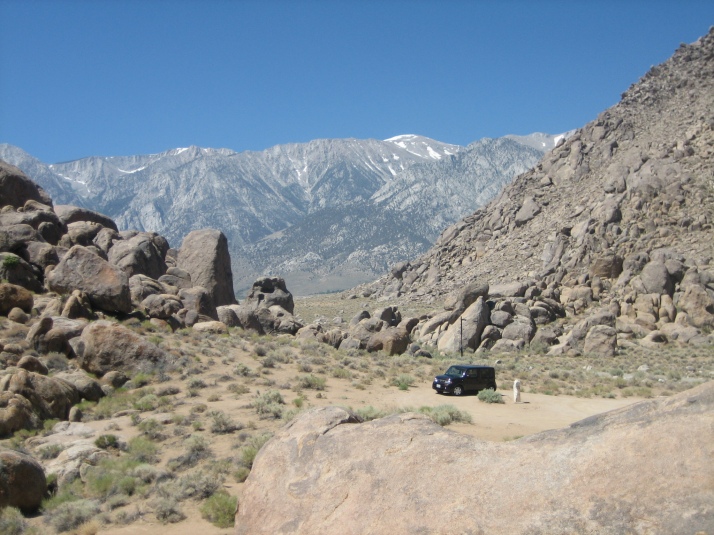 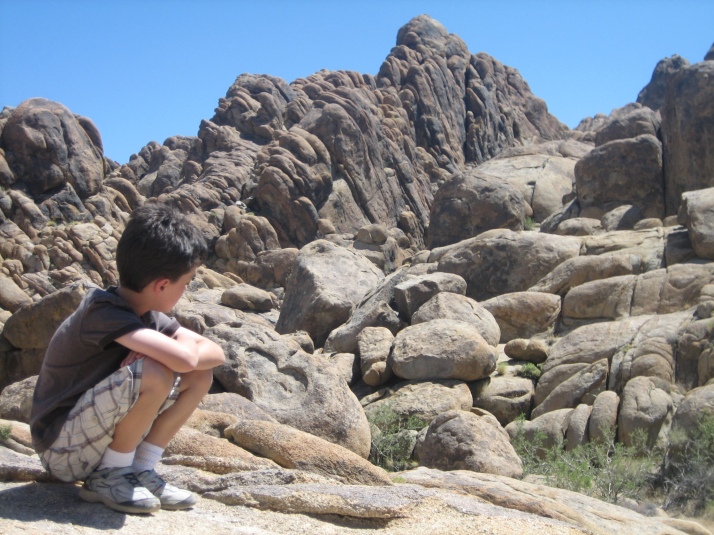 Our primary destination was Devil’s Postpile National Monument in Mammoth Lakes, California. Yes, that is snow you see behind us — in JULY in CALIFORNIA! The ski runs were open until the end of June. Crazy, and very cool. 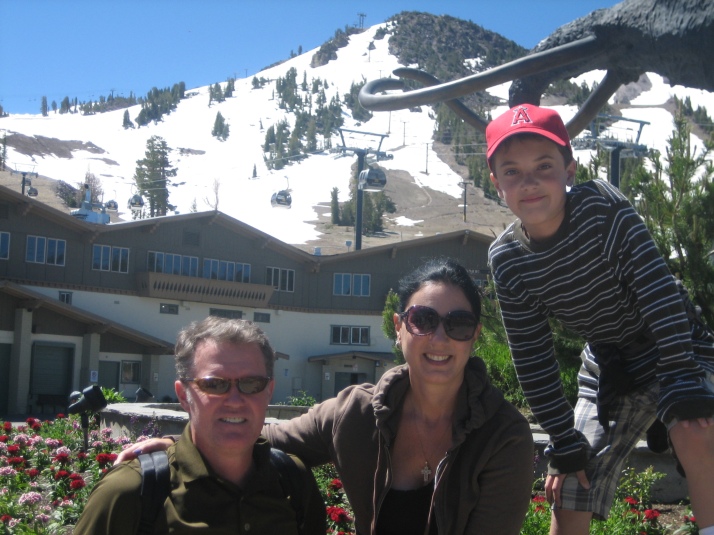 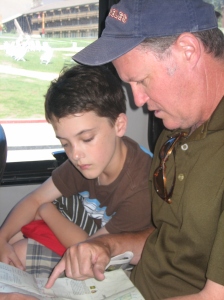 And, of course, homeschooling happens all the time, even on vacation. Skippy got lots of practice with geography, map skills, history, nature study, geology, and climate while we were away. 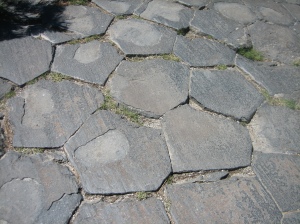 formations, perfectly formed by volcanic activity. Apparently, the formation is one of the finest examples of columnar basalt in the world. There was a time when the monument was threatened. A developer wanted to blast the area and use the basalt stone as rocks for a dam project; however, the naturalist John Muir and a prominent U.C. Berkeley geologist intervened and were able to save the site. Being an admirer of 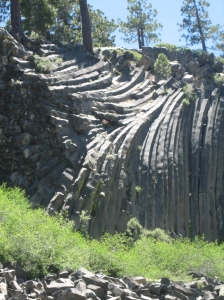 bees and a nature lover in general, I was fascinated by the hexagonal “honeycomb”  shapes of the rocks. Probably my favorite part of the formation is the curved extrusions on the left side of the wall — this  reinforces the reality that at one time the molten rock was pushed, almost like Playdoh through a Fuzzy Pumper Barber Shop extruder, into these finely formed shapes. 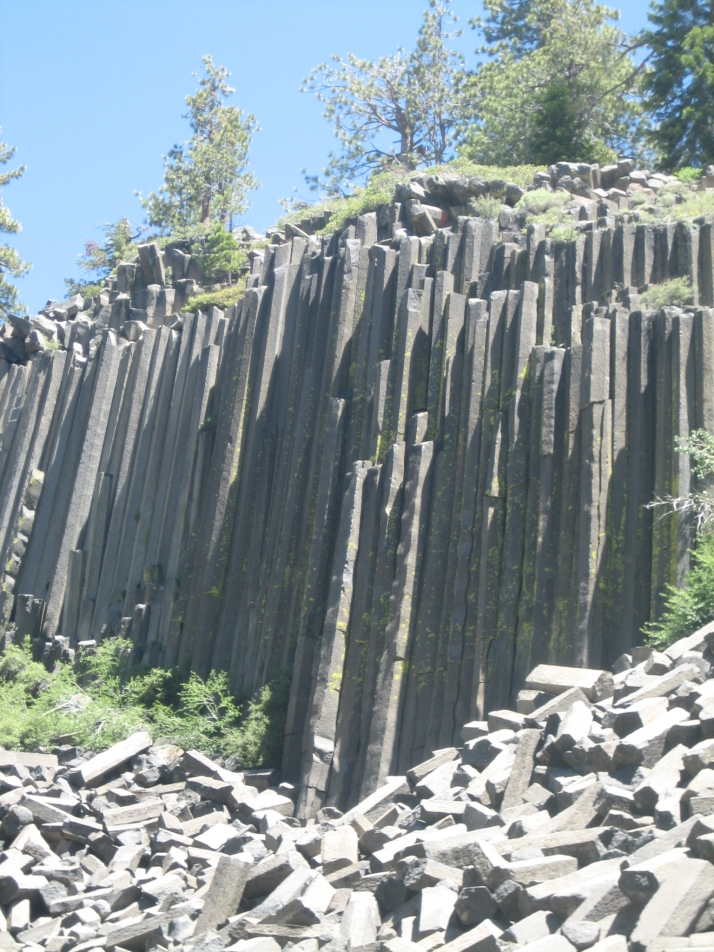 I loved seeing the wild flowers sprouting out of cliffs and rocks all along the hike. It was an interesting connection to the Gospel reading we heard at Mass that morning: the parable of the sower. His seeds fall in all different kinds of soil, only one of which bears fruit. These tiny flowers grow in the unlikeliest of places — it was a reminder to me of hope and promise, and the sheer tenacity and perseverance required to live a life of real faith in a world so opposed and hostile to such a life. Their delicacy contrasts so sharply with the harsh jags of the rock surrounding them. Beautiful…… 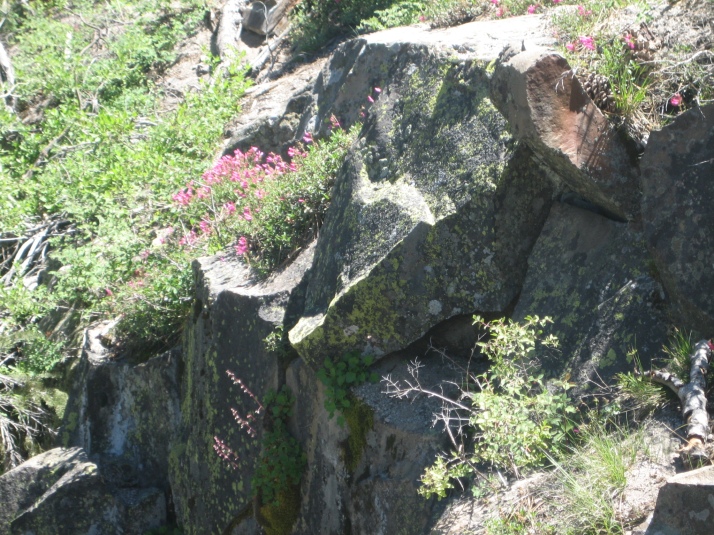 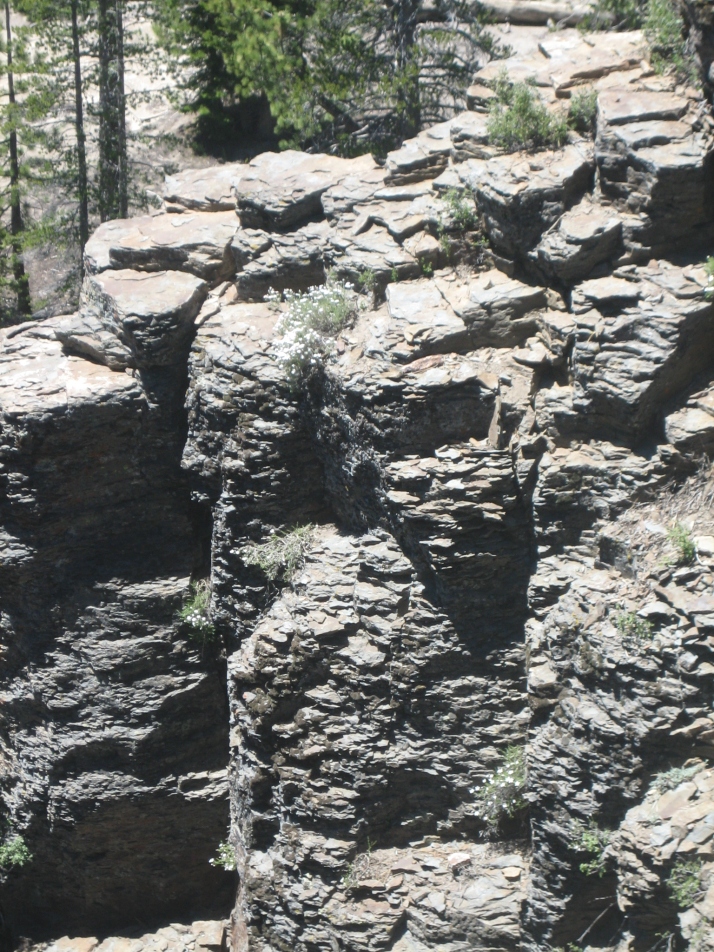 After viewing the postpile, we felt like pushing on ahead down the trail to Rainbow Falls……not part of the original plan, but we were just enjoying the day and the beauty of being outdoors in such fresh air. The river that had meandered alongside us the entire hike dropped off the sheer cliff face of a huge granite gorge. No words express the beauty and grandeur of this place. It was the high point of the hike. The pictures speak for themselves. 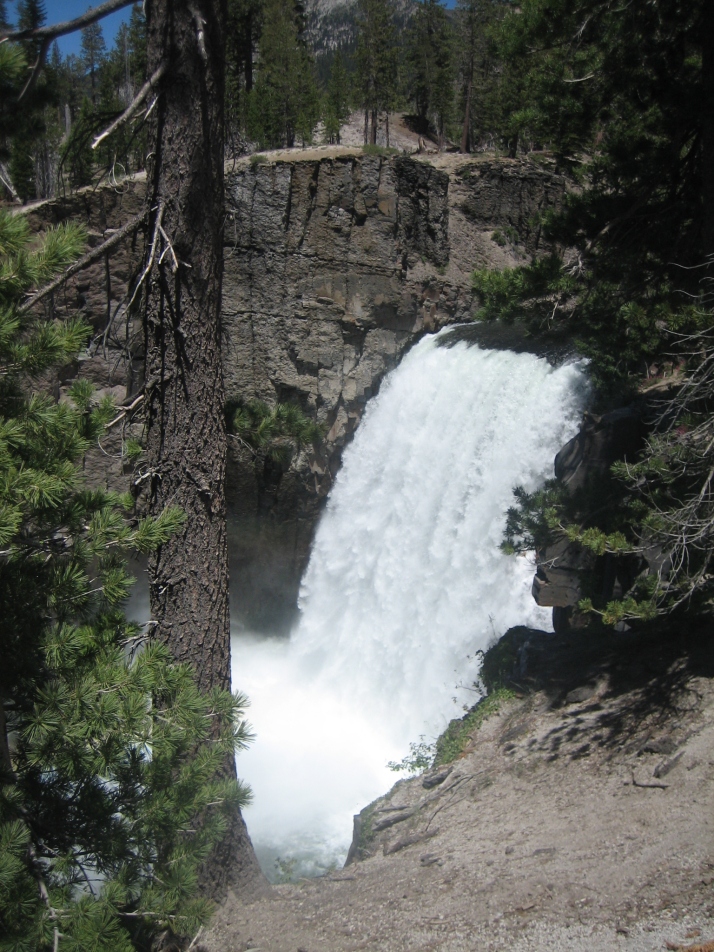 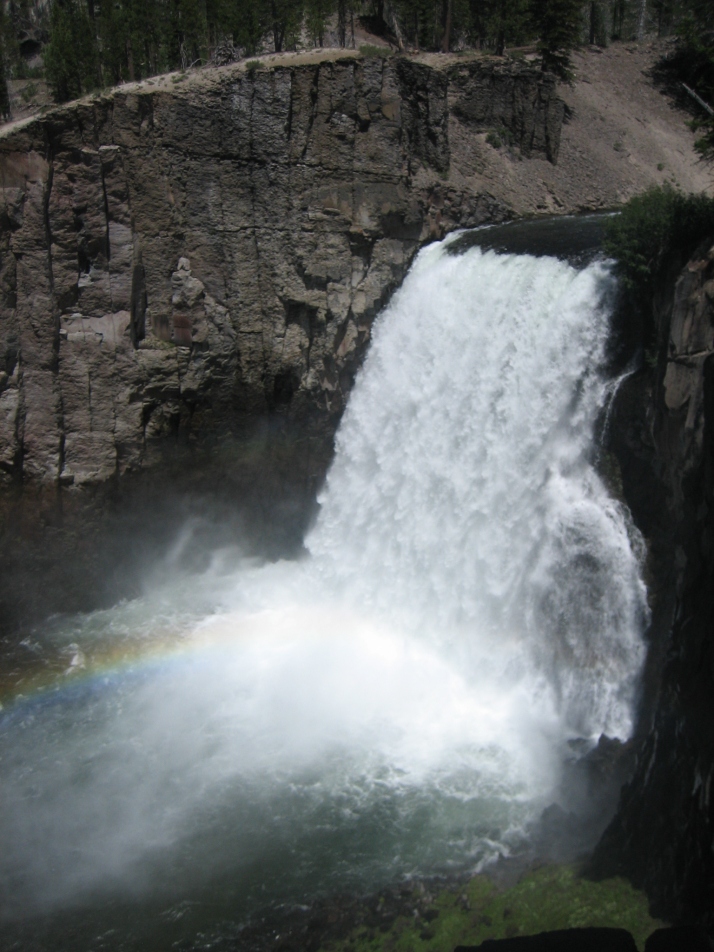 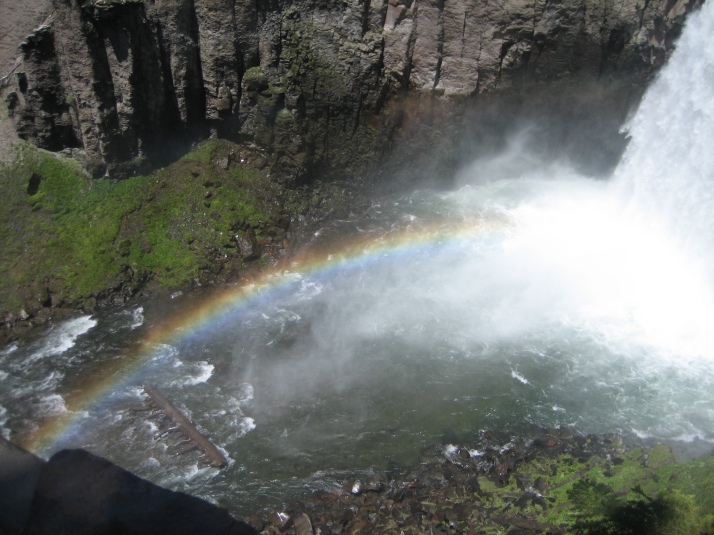 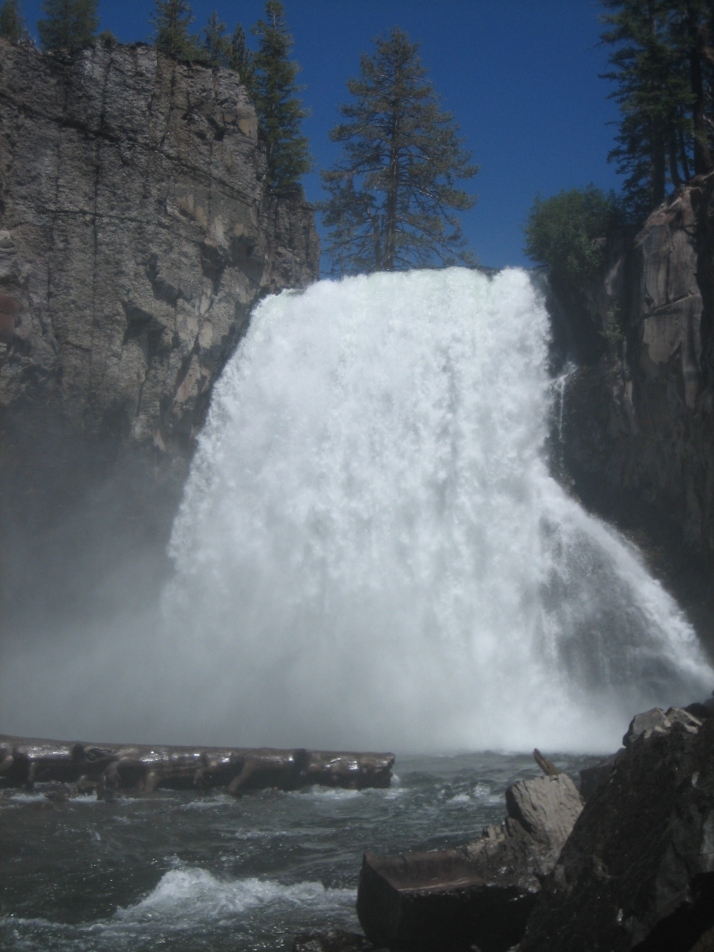 “The visible world is like a map pointing to heaven. . . We learn to see the Creator by contemplating the beauty of his creatures. In this world the goodness, wisdom, and almighty power of God shine forth. And the human intellect. . . can discover the Artist’s hand in the wonderful works he has made. Reason can know God through the Book of Nature. . . ”  — John Paul II, 1993

After reading this post, my friend, Rose, reminded me about Holy Wood Acting Studio, here in Culver City, CA. Its a new acting studio, dedicated to helping actors fulfill their mission to be true artists and servants of Truth and Beauty in the world. If you know

anyone who is interested in acting, or if you are at all interested in the power of film as an art form, the studio is worth looking in to. Be sure and watch the introductory video that comes on before you click on the link to enter the site. Its only about a minute and a half and it is very inspiring.

The mission of the studio was recently written about on the National Catholic Register website by Joseph Pronchen, which he followed up in print with a longer article.  The article gives a clear idea of the goals of the studio and articulates the important role of film in accomplishing the goal of all art, which our late holy father, Blessed John Paul II, said “is nothing less than the upliftment of the human spirit.”

Hoping and praying many good film projects, and good people, will be coming out of this studio in the future….

“Remember that you, artists, are the custodians of Beauty in the world.” — Blessed John Paul II, Letter to Artists

"Beauty will save the world." -- Fyodor Dostoevsky

This blog is under the patronage of:

one tiny violet
Create a free website or blog at WordPress.com.